We’ve done it! After five years of toiling in the gladiator pit of indie filmmaking, GHOST PHONE is now in theaters! We parked ourselves at the Storyteller 7 in Taos a couple days ago and interviewed people as they came out of movie. We could tell you what was said, but it’s so much easier for you to just watch the video.

If you haven’t seen GHOST PHONE yet, take some advice from the people in the video below and see the movie–four or five times. We’re running through December 19, 2013. On December 23, 2013 Taos Mayor Darren Cordova will draw the winning ticket on Taos Plaza. Think about packing the moving van, because you just might be a winner!

We’ve also received some good newspaper and television coverage. Check these links out:

Ghost Phone in Theaters: A Call for Help 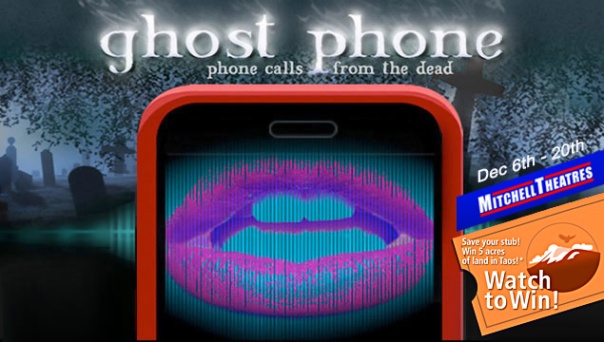 Have you ever wanted to be involved in a movie production? If no, we don’t blame you–it’s a lot of work. If yes, Darien and I have a great opportunity for you. Either way, keep reading. It might change your mind.

So here we are three days away from our World Premiere of GHOST PHONE in Mitchell Theatres. Starting on Friday Dec. 6 every person who buys a ticket for GHOST PHONE and watches the movie will have a chance to win five acres in Taos. That’s right. Every ticket gets you in the movie and also in the running for a land giveaway. GHOST PHONE, WATCH TO WIN!

We have a vision of both marketing our film and using it as a test rocket, a template so to speak for the Resurrection of the Taos Talking Pictures. It’s a fairly complex project we’re entering into. We’re bringing back a film festival AND starting a film distribution company. The film festival will be a showcase for films we accept into the brand and market internationally.

It’s hard work but someone’s gotta do it.

We’re hammering away day and night to promote the movie and the new Taos Talking a Pictures. We’ve emailed and called more media people than that lady in the now-infamous Taos-area police chase video. Darien and I have even scored some interviews in print and TV!

But we still could use some help. We want the Ghost Phone Watch to Win giveaway, and the new Taos Talking Pictures, to go viral, explode over the internet like that Gangnam Style video. That’s where you come in. Please help us spread the word virally through your social media networks. Share our stuff on Facbook, Twitter, Pinterest. Even good old-fashioned word-of-mouth is fine with us. Just get the word out. Please.

We’ll acknowledge your help on our website and social media accounts. We’ll return the favor if you have a cool project you want to share. We might even ship you a movie from our catalogue.   Simply put, we cannot be grateful enough of your help here. We’re including our GHOST PHONE press release that contains details about the movie and the new Taos Talking Pictures. All you have to do is share!

Thanks friends,
Jeff and Darien